Do you find yourself with an older receiver or surround processor that lacks music streaming capabilities? You’re not alone.

If you’re like me — budget-conscious and wary of big upgrades until they’re absolutely necessary, perhaps you’re researching affordable options for adding music streaming capabilities to your current system. Perhaps you love the vintage sound from that old receiver or integrated amp, but you’re eager to explore the convenience of music streaming. 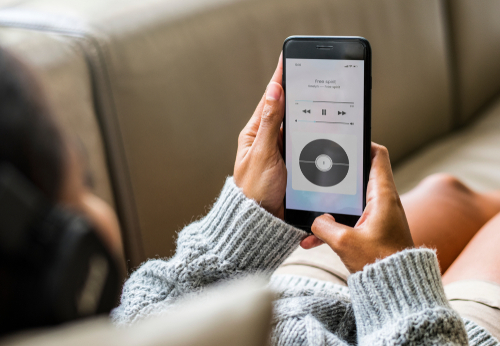 The good news is that you don’t have to spend thousands or even hundreds to add music streaming to your existing receiver, tuner, or home theater surround processor. Could you spend hundreds or thousands? Absolutely. But that’s not what this article is about – primarily. Instead, I’d like to give you some options to start streaming quickly and affordably.

This review endeavors to answer these questions and more:

This is definitely the cheapest, quickest, and easiest way to start streaming. However, it’s not necessarily the most convenient, because the device you’re using as a music streamer has to be physically connected to your receiver or preamp. You won’t be able to control your music from across the room or from another room.

1. Plug your phone, tablet, PC, or Mac into your RCA inputs on the back of your receiver or preamp using the headphone jack on your device. You’ll need one of these things. 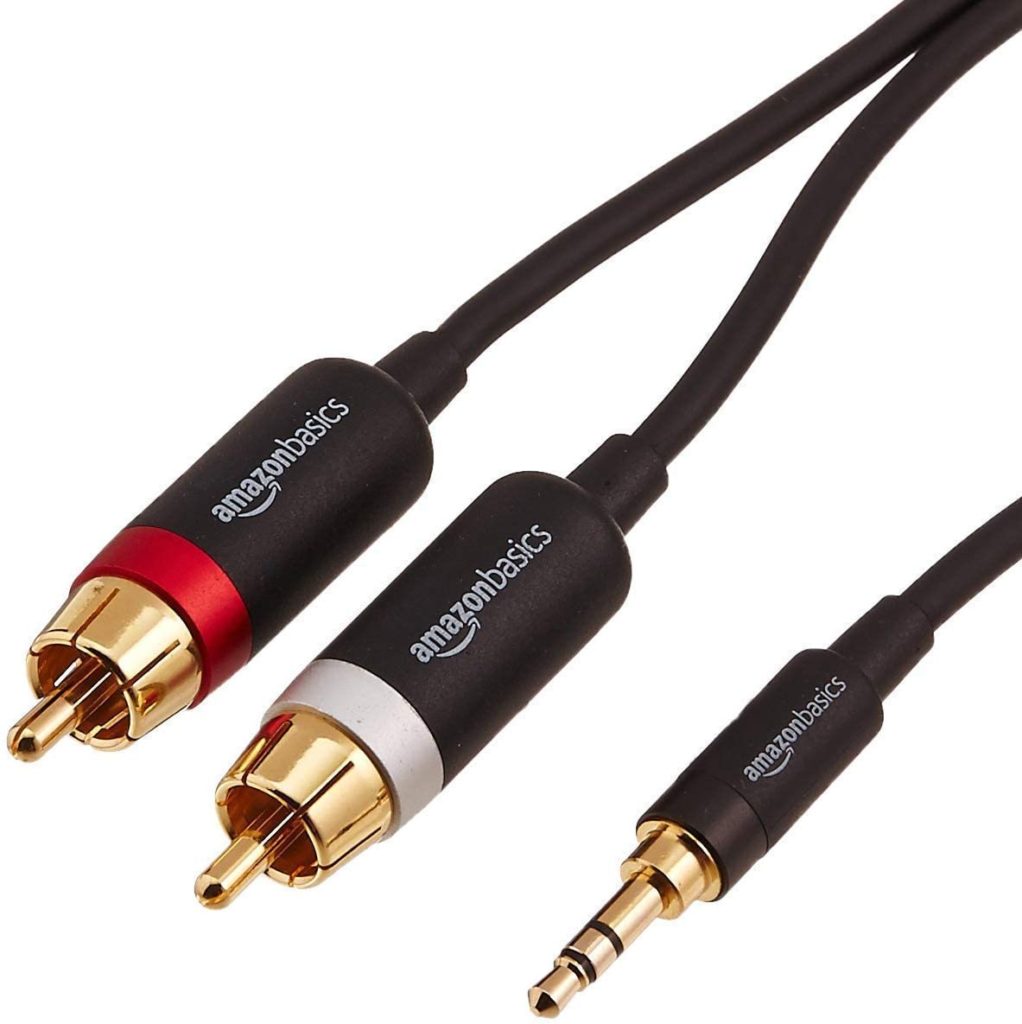 If have a newer iPhone that lacks a headphone jack, you’ll need one of these adapters. 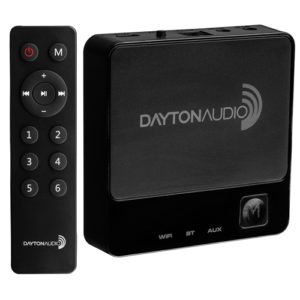 It’s tough to find fault with a product that does so much at such a low price.

Use it in conjunction with the Dayton Audio Hi-Fly App to stream music to your receiver and also to speakers in other rooms. Like others in our review, it supports popular music streaming apps like Spotify, TIDAL, Napster, TuneIn, and iHeartRadio.

Have more than one music fan in the house? No problem. They can control the audio in their room using the same device. Not only does it work with your favorite music streaming apps, it will also stream music from your network-connected NAS via DLNA. Among other things, the included IR remote lets you control volume, a nice option if you’d like to streamline your 2-channel system and get rid of your preamp.

Some of the features include:

Price: Discontinued, but you’re likely to find one for $49.99 and up on eBay (and perhaps elsewhere – I’ve seen them on Craigslist and Facebook Marketplace) 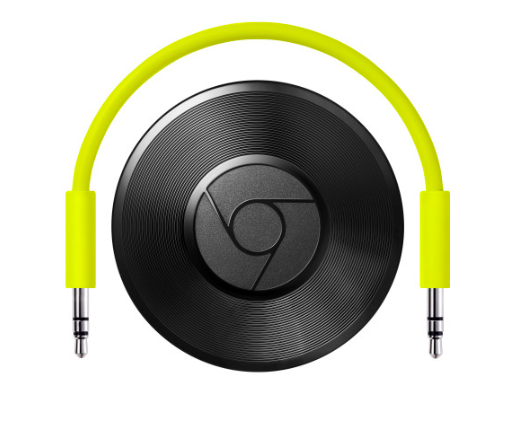 Inexpensive way to get up and running with music streaming quickly.
Supports a variety of popular music stream apps, like Spotify, Tidal, Pandora, Deezer, and Google Play Music

This thing is tiny. Don’t lose it!
No support for streaming music from a NAS via DLNA
The DAC isn’t the best, but, for the money, it’s solid.

This is a brilliant, tiny little puck-shaped WiFi streaming device that also has a built-in DAC. Connect it to your DAC or optical-enabled receiver via mini Toslink, or to your receiver via 3.5mm stereo adapter, configure the app, and you’re ready to start streaming. I’ve been using this device for over a year now, and it’s been a game changer.

I’ve used it in a number of configurations, including the ones below. I provide these as examples of the kind of flexibility and sound quality you can get with an affordable wireless music streaming device like the Chromecast Audio.

1. 3.5mm analog out to stereo RCA-in on my preamp, the Lexicon MC-8 Preamp-Processor.
2. 3.5mm mini Toslink out to Toslink-in on my preamp. This arrangement makes use of the Lexicon’s internal DAC, which despite being an older-generation DAC, is quite smooth and detailed – an upgrade from the Chromecast Audio’s internal DAC.
3. 3.5mm mini Toslink out to Toslink-in on my Schiit Modi 3 DAC, and then stereo RCAs from the Schiit Modi 3 to the Lexicon pre-pro. This is a noticeable step up compared to the sound coming from Lexicon’s internal DAC, but it’s not really a fair comparison, since we’re talking about a modern dedicated DAC (the Schiit Modi 3) compared to an internal DAC on a 17-year-old pre-pro. With the Modi 3 in the chain, the sound is detailed, dynamic, and deep.

How does it work?

I’m going to summarize and expand on the instructions Google provides here.

2. Connect your Chromecast Audio to a power source via micro USB cable (not provided in the package).

3. Make sure your tablet or mobile device and the Chromecast Audio are on the same WiFi network.

4. On your mobile device or tablet, download the Google Home app and follow the Chromecast Audio setup instructions here.

Affordable support for aptX, aptX Low Latency, AAC, and SBC Codecs
Supports both analog 3.5mm out and SPDIF (optical) out, for connecting to an external DAC
Up to 15 hours of battery life on a single charge (claimed)

Continuing on our theme of devices that will support wireless music streaming with older receivers, tuners, and surround processors, we come to the compact and affordable Monoprice Bluetooth 5 Transmitter & Receiver. If you’d like to stream music from a Qualcomm aptX-enabled mobile device, this could be the unit for you. The lack of Wi-Fi support makes it tough to recommend this device overall, but the lack of Wi-Fi may not be a downside for many. Case-mounted switches allow you to choose between sending or receiving, and analog or digital (SPDIF) connectivity. 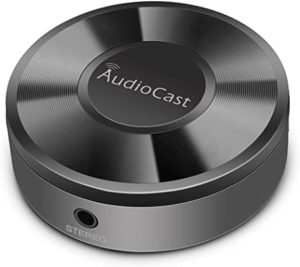 This small device resembles the Google Chromecast Audio in many ways – the puck shape, the top that looks like a vinyl record (complete with little grooves!). It’s compatible with both iOS and Android, and supports Airplay, DLNA Play, and Qplay.

The Audiocast M5 lets you stream music to multiple rooms – play the same song or different songs in each room – all controlled from the app.

It has a convenient WPS button for pairing the device quickly with the wireless network in your home. Unlike the Chromecast Audio, it lacks the option to output a digital stream to an external DAC, so you’re limited to connecting via analog output (3.5mm stereo jack) only. It does, however, offer multiple streaming audio quality options, to match your network conditions. The steps for getting started are similar to those above for the Chromecast Audio, except the Audiocast requires its own app called – you guessed it – Audiocast. Required power source: DC5V 1000mA with micro USB. (The micro USB cable is included; a wall adapter is not.) As of this writing, the M5 has 125 reviews and a 3.4-star rating on Amazon.com. Note: this product is sometimes called “ACEMAX M5 Audiocast.” 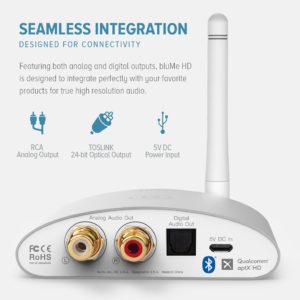 No Wi-Fi support
Pricier than most in this review

Auris bluMe HD Bluetooth 5.0 Music Receiver supports Bluetooth 5.0 along with aptX, which offers higher-resolution streaming from your aptX-enabled Quallcom device. A SPDIF output enables connection to an external DAC or an optical input on your receiver. The bluME HD can play any audio source you can play on your Bluetooth or aptX-enabled device. It comes with an RCA-to-RCA audio cable, a 3.5mm-to-RCA splitter, and USB to micro USB cable (but not a wall adapter). It claims a Bluetooth range of 100′ or 30 meters. 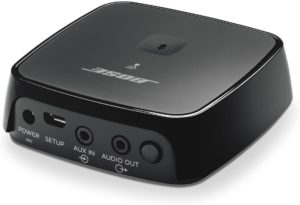 At $150, it’s pricier than most devices on this list, for the most part by a factor of 3-4. If you’re looking to get into audio streaming cheaply and quickly, there are much more affordable options. This unit has many of the features of other units in this review, but at a much higher price. Use it in conjunction with the Bose SoundTouch app to access music sources like Spotify, Pandora, or music stored on a NAS device or your computer, and enjoy voice control via Alexa. 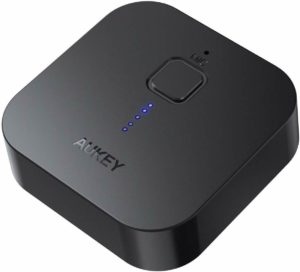 No support for streaming via Wi-Fi

At the ultra-affordable end of the spectrum, we come to the Monoprice AUKEY Bluetooth Receiver v4.1 Wireless Audio Music Adapter A2DP with Hands-Free Calling. If you primarily use a Bluetooth device to listen to music, and you’re not concerned about the higher sound quality offered by Wi-Fi streaming, this may be the device for you. Power it via micro USB cable (included), or go hit the road on battery power for up to 18 hours (claimed battery life on a single charge). The battery-power is a nice option not found on other devices in this review – use it to listen to music in the car, or plug it into your battery-powered speaker for music on the go. The package includes a cord with a 3.5mm stereo jack on each end, a cord with a stereo 3.5mm jack on one end and dual RCA jacks on the other, and USB charger cord (no wall charger, though).

Why did Google discontinue Chromecast Audio?

I have no idea why Google decided to kill Chromecast Audio. But in January 2019, they stopped filling orders and confirmed that indeed the product had been discontinued. Perhaps there wasn’t a big enough market to keep it rolling. Perhaps they wanted to focus on the rest of the Chromecast lineup, which is oriented towards video streaming with TVs. I found out about Chromecast Audio only a week or two before it was discontinued. I bought one, loved it, and quickly found two on the shelves at my local Walmart for $15 each, and I grabbed them right away. It’s been more than a year since Google discontinued the Chromecast Audio. Initially there was speculation that they’d announce a replacement, but there’s been no such announcement, and no replacement.

Can you use Google Chromecast for streaming audio?

Although the HDMI-based Google Chromecast supports music streaming apps like Pandora and Google Play, playback is limited to HDMI connections only, so typically you’ll be listening to music through your TV. Furthermore, most older receivers and preamps don’t support HDMI, so it’s not really relevant to the topic of this review.

Is Bluetooth 5.0 better for music streaming compared to previous versions of Bluetooth?

No, it uses the same codec as older versions of Bluetooth, so the sound quality will be the same.

Is aptX better for music streaming?

aptX supports up to 24-bit/96kHz resolution – better than CD, and far better than Bluetooth.

What do you need to stream music via aptX?

What does the future hold for wireless music streaming?

There are many affordable receivers on the market that support audio streaming natively. Sony, Yamaha, Onkyo, and Pioneer are a few of the brands that offer basic, affordable two-channel and multi-channel receivers with built-in Wi-Fi and Bluetooth streaming.